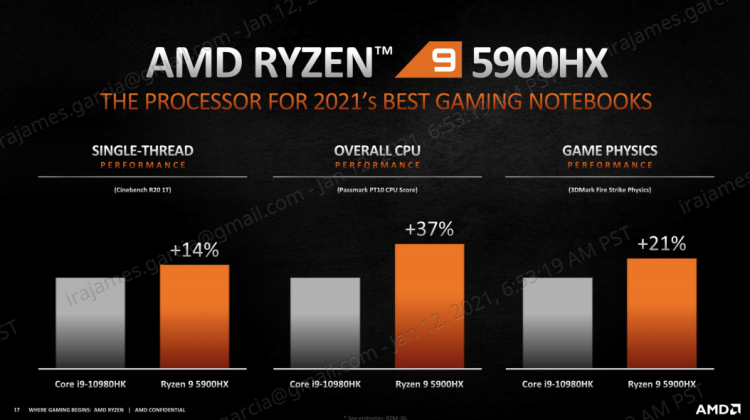 Again, CES 2021 is close. The global pandemic has not been easy for any of us, but given the circumstances we have seen a lot of technological progress this year. AMD was happy with their Ryzen 5000 series desktop processors last quarter and now they are here to show off their new mobile processors at CES 2021.

These new notebooks with Ryzen 5000 Series Mobile processors are expected to be available from leading PC manufacturers in the first quarter of 2021. Among these new Zen 3-core products, we will also see notebooks equipped with the recently unveiled AMD Ryzen PRO 5000 Series mobile processors, which offer enterprise-class security and transparent management for business users.

By 2021, AMD expects a broad portfolio of more than 150 consumer and commercial notebooks based on the Ryzen 5000 series mobile processors.

AMD Ryzen 5000 H-series mobile processors deliver an immersive gaming experience at the top of the product stack. They combine unmatched performance with exceptional battery life with up to 8 cores and 16 threads and are based on the new AMD Zen 3 architecture.

The AMD Ryzen 5000 U-Series mobile processors are the perfect combination of power and efficiency for consumers looking for performance on the go.

On the other hand, AMD’s Ryzen HX series processors are the company’s latest processors that will deliver high performance for gamers and game developers.

We are all very excited about the kind of performance we will get with the new AMD Ryzen 5000 series mobile processors.

For gaming and desktop notebooks, it has always been assumed that the Intel + NVIDIA combination is the king of performance in these so-called real-world applications.