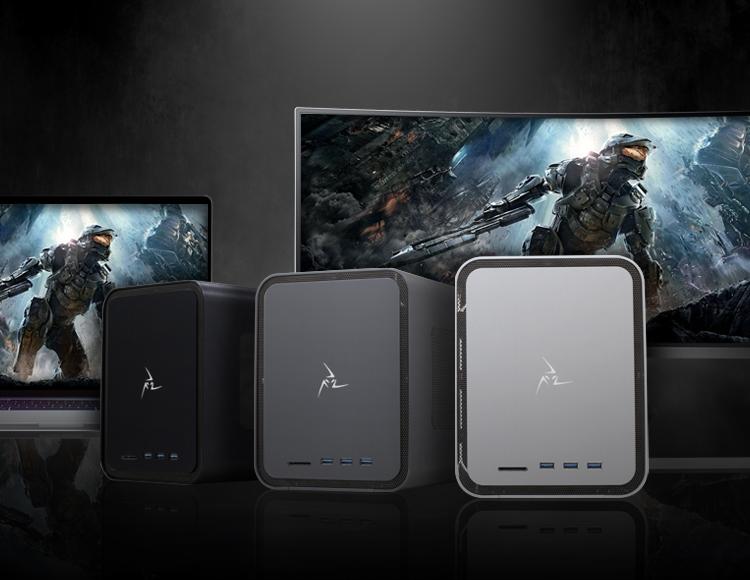 This post contains affiliate links for which we may receive a commission at no additional cost if you make a purchase through our links. As Amazon employees, we can make money on eligible purchases. Read more.

It’s hard to find an eGPU that beats the Mantiz Saturn Pro in this price range.

The Mantiz MZ-03 Saturn Pro EGPU (V2) is an external graphics card package (eGPU) that can dramatically increase the graphics performance of an ultraportable notebook with a single Thunderbolt 3 cable. This is the second generation of Mantiz eGPU boxes, replacing the impressive Mantiz Venus that we introduced as part of the most affordable Thunderbolt 3 boxes.

Although laptops are becoming more powerful, they still can’t match the graphics performance of desktop computers. If you want to create professional content or play AAA games on your slim, lightweight laptop, you’ll need to purchase an eGPU case. This allows you to connect a desktop-class GPU to give your Ultrabook more juice to perform graphics tasks, and that brings us to the Mantiz Saturn Pro electronic GPU review.

The Mantiz Saturn Pro is one of the best Thunderbolt 3 eGPU cases you can find on the market. It ranks below Razer Core X Chroma and slightly above Razer Core X, which has long been the gold standard, but that’s about to change. With five USB ports and a few more, the Saturn Pro aims straight for first place without breaking the bank.

If you have a MacBook or the latest version of the Dell XPS 13, you’ll quickly find that connectivity options are limited. This is a trend that affects most newer laptops, as manufacturers continue to make thinner, lighter laptops with Thunderbolt 3 at the expense of older ports. Saturn Pro may also be perfect for helping you out of this mess.

The Mantiz MZ-03 Saturn Pro EGPU (V2), like most eGPU boxes, comes empty, so you’ll need to install your own desktop graphics card. For Mac users, this is limited to the AMD GPU. You’ll also need a laptop with a Thunderbolt 3 (or Thunderbolt 4) port, preferably with four PCIe Express slots.

It’s hard to find an eGPU that beats the Mantiz Saturn Pro in this price range. The 750-watt internal power supply delivers an impressive 550 watts to the GPU and 100 watts to the host, enough power for a 16-inch MacBook Pro when running at full speed. Since the Nvidia RTX 3090 only requires 350 watts, the Saturn Pro’s power is sufficient for most powerful GPUs. 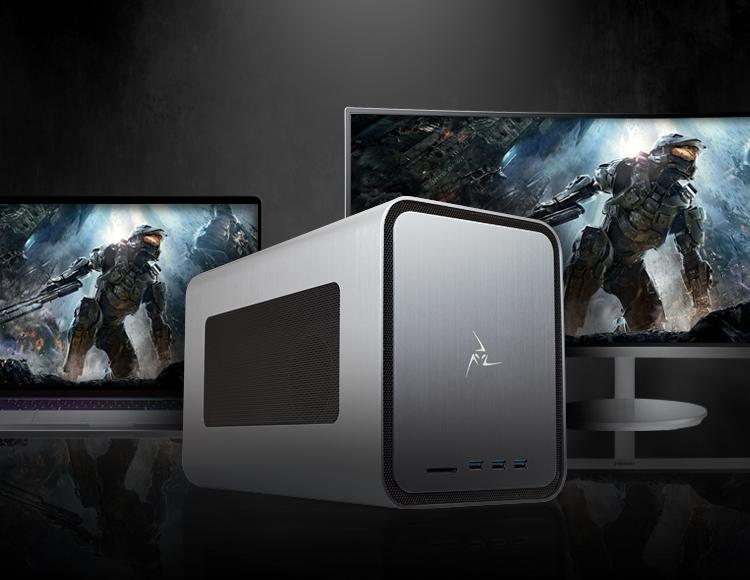 Mantiz’s Saturn Pro is slightly larger than the previous generation, mainly to accommodate a powerful 750W 80+ ATX Gold power supply. It is made entirely of aluminum with a hairbrush that fits well with modern laptops. There is no RGB lighting here, so it won’t be moved in a professional environment.

The Saturn Pro is available in grey, silver and black, so you can choose the colour that best suits your laptop.

On the front of the electronics unit are three USB-A 3.0 ports, an SD 4.0 port and a white Mantiz logo. Ventilation grilles are located on the front to improve cooling. The eGPU is perforated on the sides for better air circulation. On the left side you see two fans (we’ll get to that later), and on the other side your installed GPU. So don’t worry, if you get your hands on an RTX 3080 with RGB lighting, you’ll still be able to lead your friends by the nose. 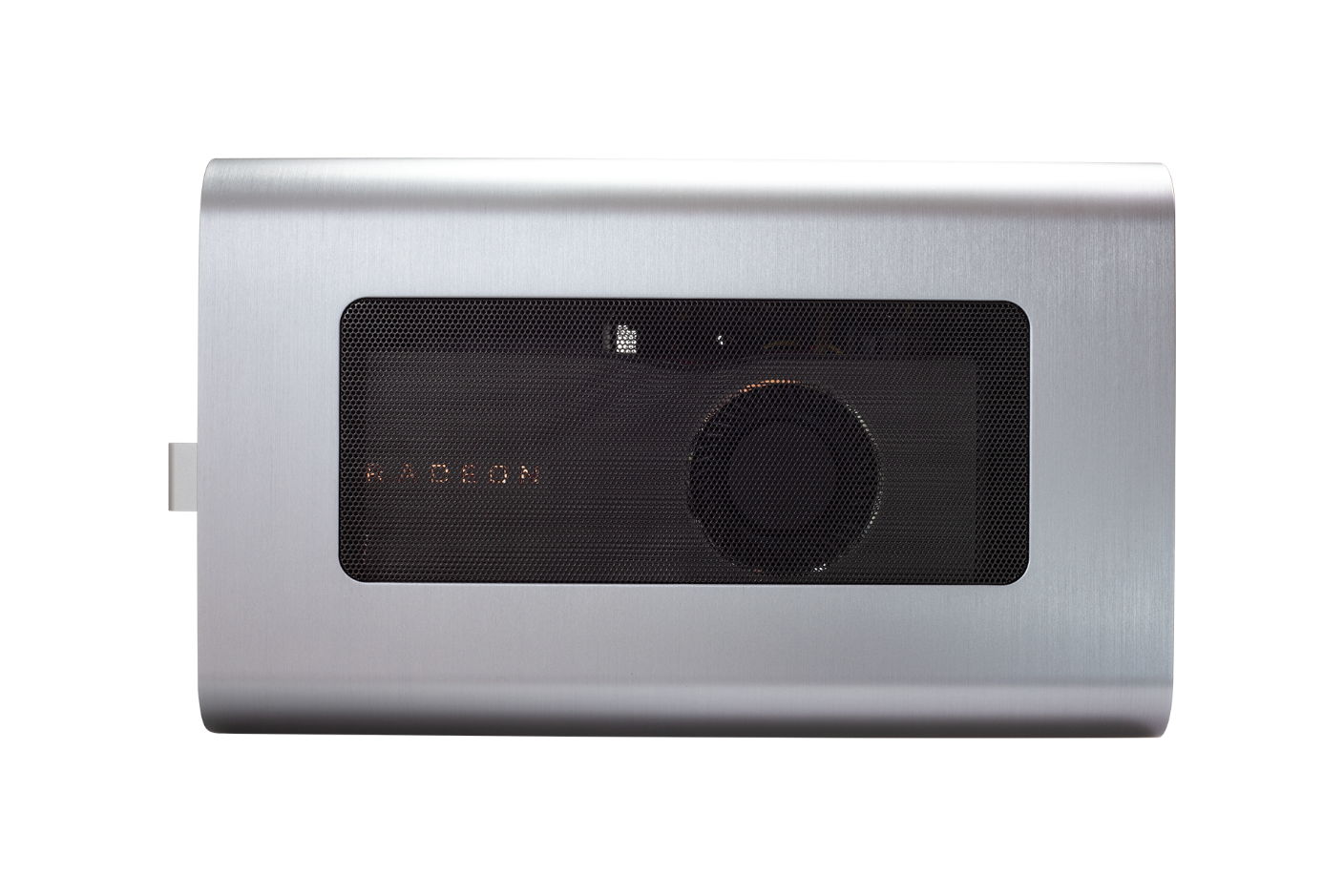 Two additional USB-A 3.0 ports, a Gigabit RJ45 LAN port and a Thunderbolt 3 port on the back provide 100 watts of power to charge the notebook. With Mantiz Saturn Pro, you don’t have to spend extra money on a docking station for your laptop. It has most of the ports you need for performance, including the ports that come with the GPU for external displays. 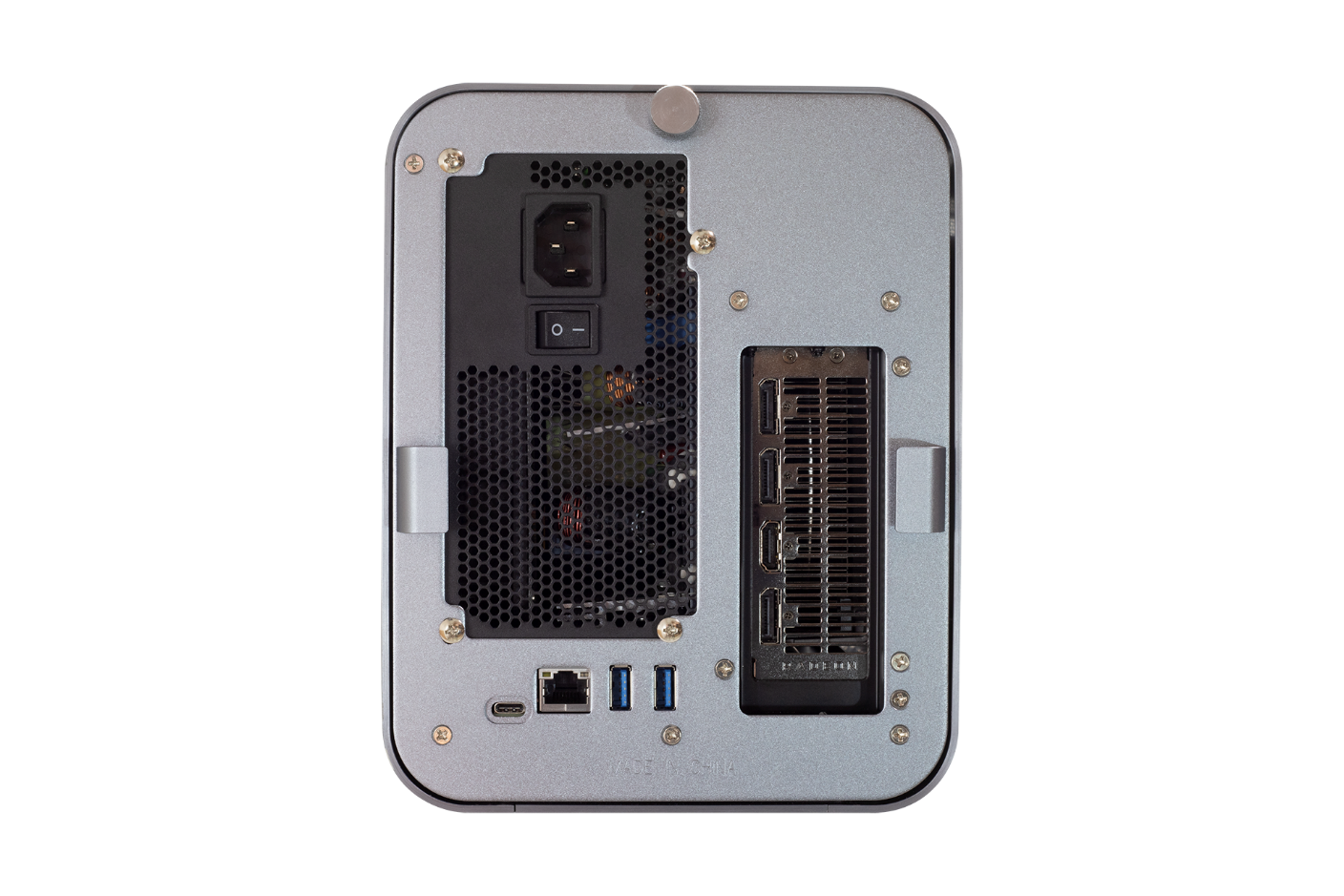 The back is also vented and contains a switch, a power connector and a circuit breaker to access the ports of the installed GPU. You can access the inner cage by opening the large thumb screw at the top of the back panel and sliding it out evenly using the L-shaped hooks on the sides. You can do everything manually. You don’t need any tools. 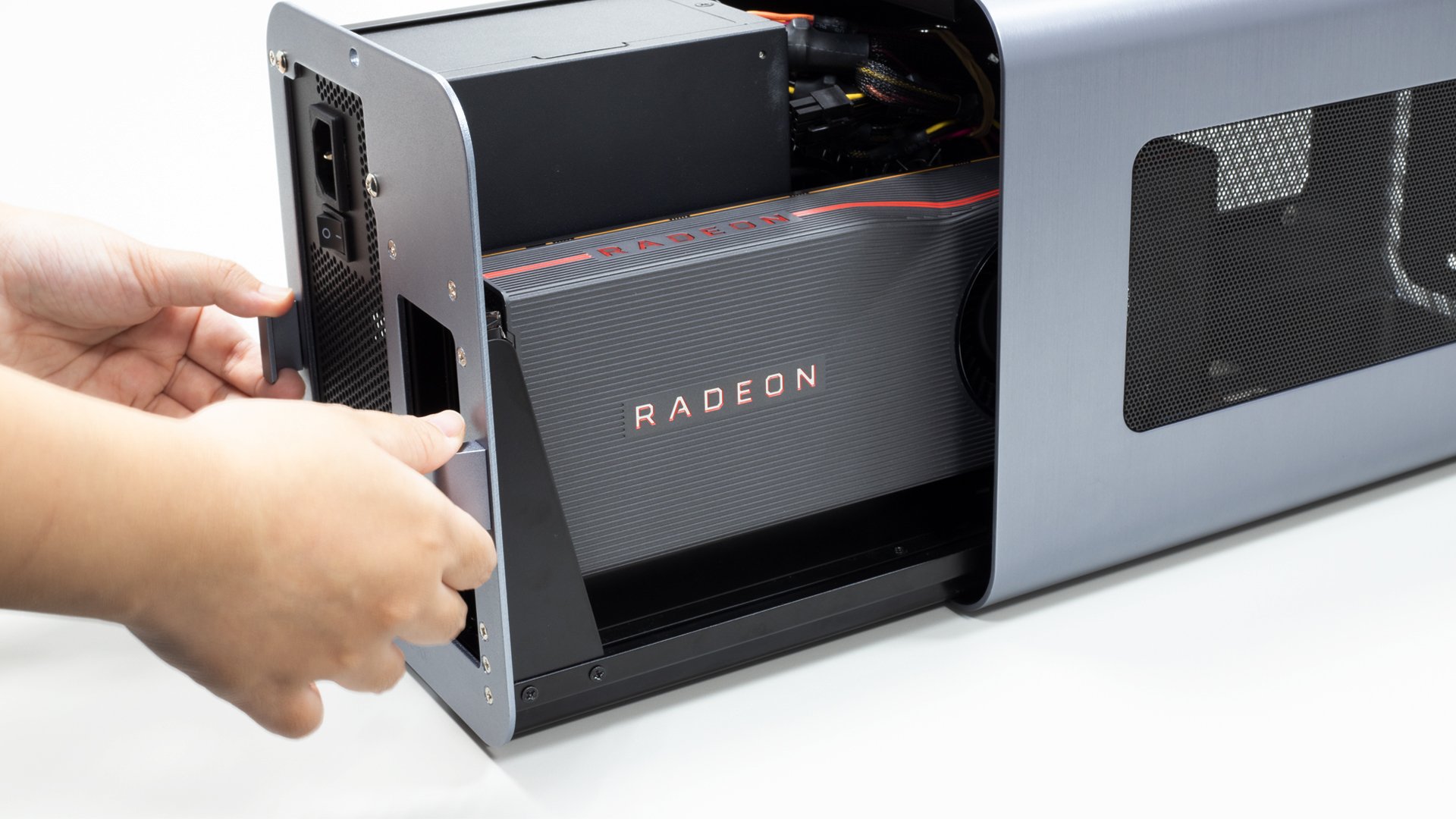 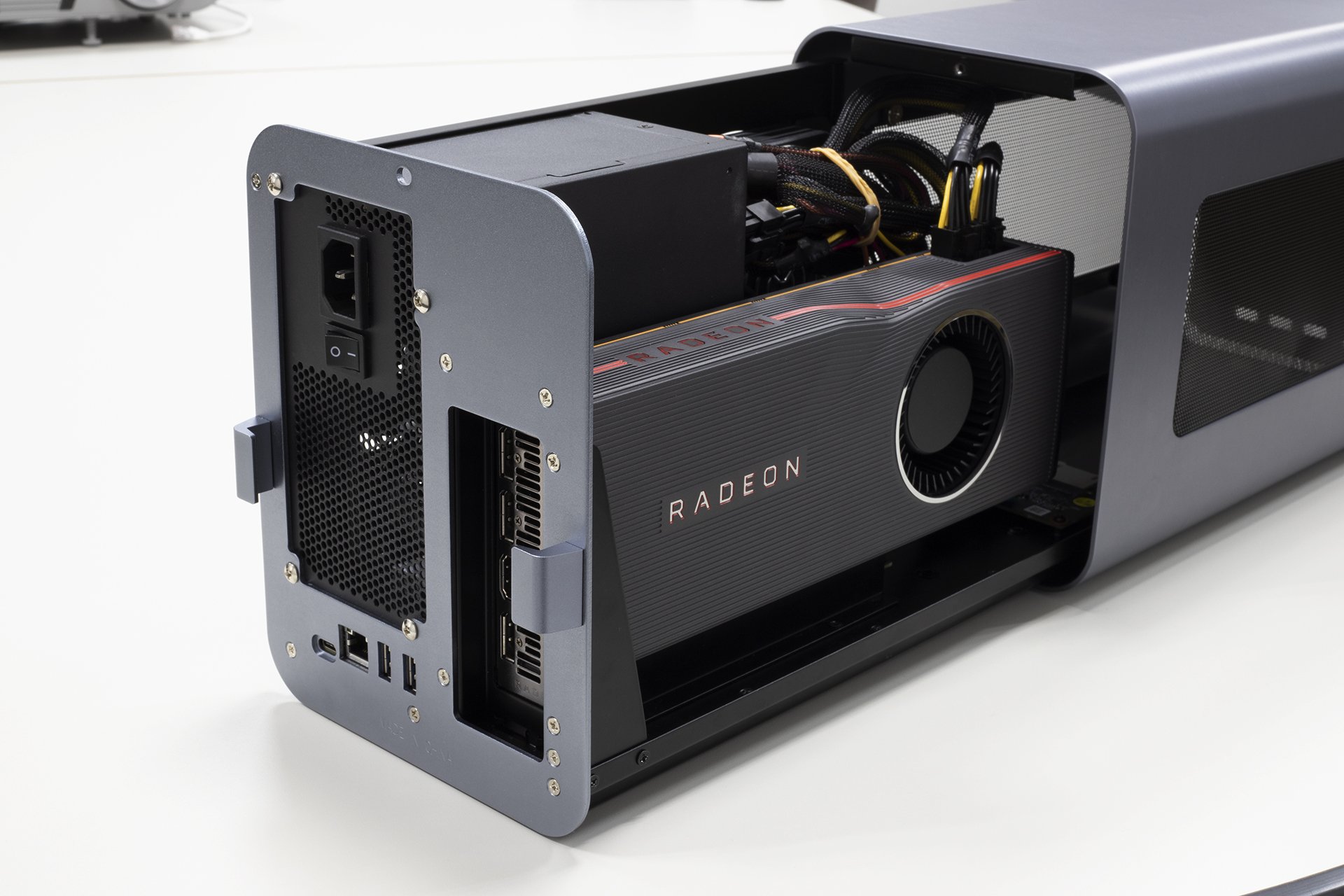 In this case, two Thunderbolt 3 controllers are used, which has a significant impact on power consumption. One controller is for the graphics card and the other for additional I/Os. You can connect as many devices as you want to the Mantiz Saturn Pro without sacrificing GPU performance or having to deal with connectivity issues like constant device failures.

Removing the inner ring gives you access to two oversized 120mm fans, one for the power supply and one for the case, which also means better overall cooling efficiency than the expensive Razer Core X Chroma, which has 120+60mm fans. You can remove the fans and mount the 120mm heatsink on the same bracket for your liquid cooled AIO GPU.

Another well thought out feature of this case is the fan off mode. The Saturn Pro is completely silent when using light to prevent distraction.

In addition to the power supply, there is a 2.75-IPP slot that supports full-length/height/width graphics cards. Power is controlled by three sets of 6+2 pin PCIe power cables, providing the card with a total of 550W, enough to overclock most GPUs. The installation of the GPU is the same as the motherboard; just drag and drop until you hear a click. The only difficulty is that you then have to deal with cable management. 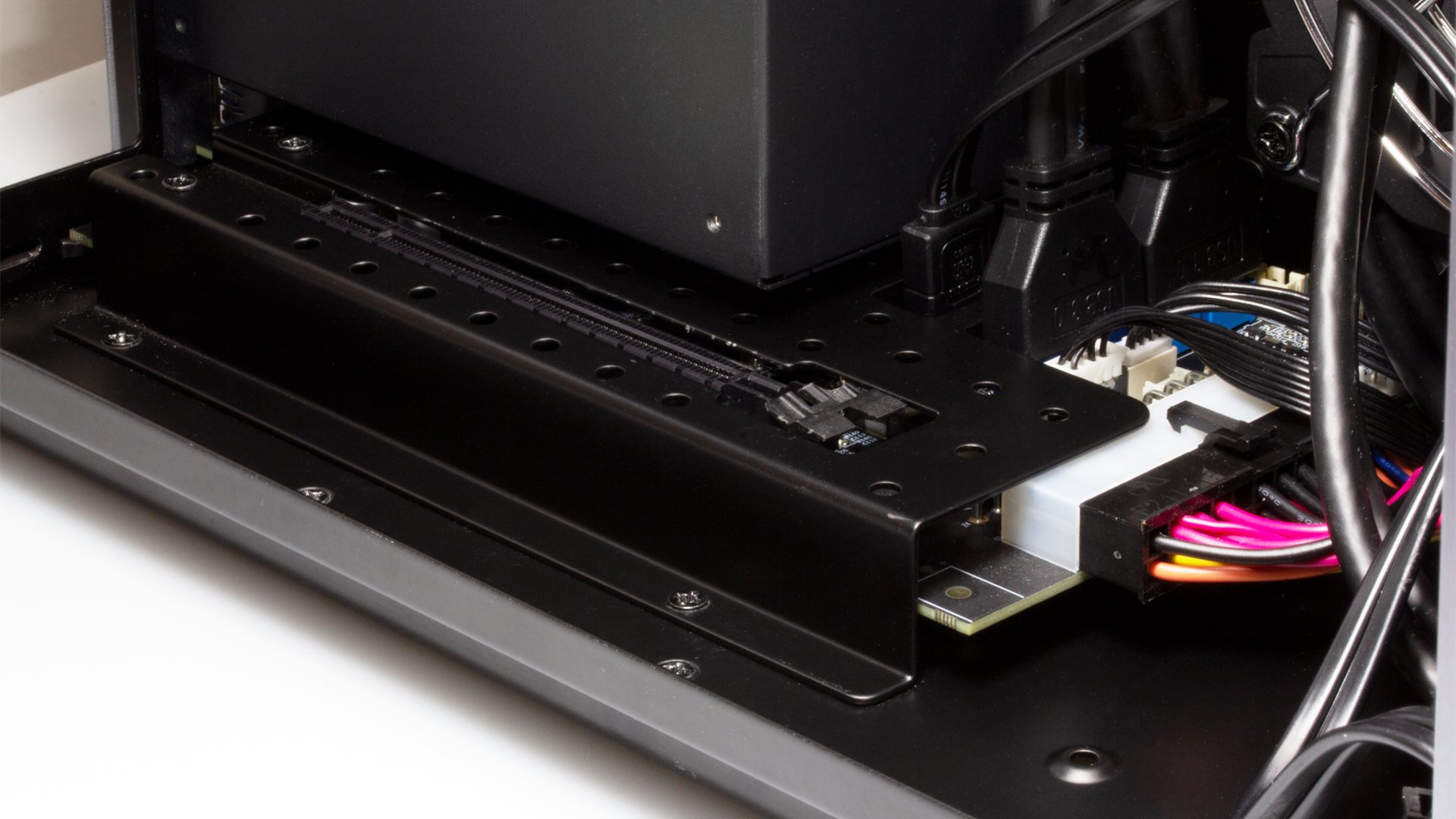 The SATA 2.5 cradle is located directly above the casing fan if you want to extend the memory life of your thin and light notebook. The Mantiz Saturn Pro includes all cables and screws to connect your GPU and player. Then press the inner cage evenly until it clicks and tighten the knurled screw. Mantiz supplies the eGPU case with a 0.7 m Thunderbolt 3 cable for connection to the laptop.

The Mantiz Saturn Pro is a nice and powerful eGPU package that won’t blow the bank. This is the best combination of features you won’t find in other Thunderbolt 3 eGPU boxes. Everything about the Saturn Pro comes at a high price.

The design and finish matches most modern laptops on the market, and the all-aluminum quality means you can take this case anywhere without denting it. The 80+ 750W internal power supply and two Thunderbolt 3 controllers are the right combination for enthusiasts and power users. However, the dual 120mm fans and fan design allow the GPU to be pushed to its limits without turning the enclosure into an oven.

What started as a Thunderbolt eGPU box capable of connectivity has turned out to be the best eGPU box on the market today. The second generation Mantiz Saturn Pro is the perfect accessory to add more graphics power and connectivity to your otherwise thin and lightweight laptop.